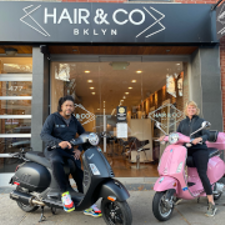 Shannon King has served as an ambassador for large manufacturers on stages across the country and around the world.  He also develops curriculum for classes, and trains the trainers who implement the curriculum.  Born to parents who were both stylists, King grew up in the industry and began working in Baltimore straight out of cosmetoglogy school while attending Townson University of business.  Company leaders quickly recognized his talents as a trainer and his knack for performing, and he became a national education in 1998.  He's worked New York Fashion Week, done makeovers on Oprah and served as the global director of education and training for large manufacturers, and the creative design lead for Keune North America.  Shannon always goes back to the salon as owner/director of Hair+Co.  BKLYN, saying "I love being behind the chair. That's where it all starts, and where it all comes together."

Tapping into Diversification to Grow Your Beauty Business

The Kings and their power-packed panel will share demographics that demonstrate how the ethnic fabric of our country is changing..... More Info

Let’s face it, re-opening was a challenge, and it was and continues to be expensive. A $5 price increase... More Info